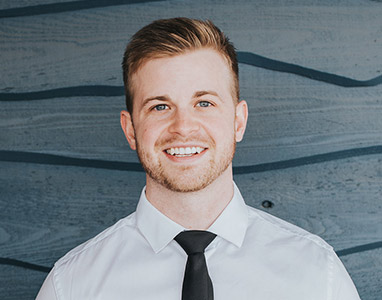 Dr. Scott Matheson originally hails from Golden, BC where he spent his formative years either outdoors taking advantage of the mountains or playing competitive sports including golf, soccer, and hockey - he even had a couple teeth knocked out in the process and spent his fair share of time in the dental chair!

After leaving home to play junior hockey and travel the world, he pursued a Bachelor of Science degree at Thompson Rivers University, majoring in chemical biology in 2007. During his undergrad, he was privileged enough to work for the government researching topics including the taste and aroma of wine. Furthermore, his year senior honours project on "Oral antimicrobial peptides with applications in oral health" was published in the International Journal of Biology. It was a natural transition to dentistry from there, while he pursued a Doctor of Dental Medicine (DMD) at the University of British Columbia, graduating with multiple recognitions.

After graduating, Dr. Scott moved to Alberta and settled in Sylvan Lake in a home he shares with his rambunctious Golden Retriever, Luna. He has been with Southpointe Dental ever since. Dr. Scott practices in all areas of general dentistry and looks forward to helping you and your family have healthy, beautiful smiles.

Give yourself a reason to smile - schedule your appointment today with one of our dentists here at Southpointe Dental!

At Southpointe Dental, we offer a variety of dental services for you and your loved ones.

What to do in a Dental Emergency

Read these tips if you are unable to see a dentist right away.

Interested in dental sedation? Learn more about the options available to you.

Learn more about wisdom teeth and the services we provide.

Contact your Red Deer dentists to make an appointment.

Whether you're a new patient or an existing patient, looking to book your regular check-up or have an inquiry about cosmetic services, wisdom teeth removal, or other services, we'd love to hear from you.

All services provided by general dentists.